The BIG star, of course, was John Wayne. And that may be the reason that I never saw it. (I was never that big a fan of Mr Wayne, an admission I put in parenthesis to keep it on the down-low.)

After reading the Wiki listing, I now know that Glen Campbell also sang the theme song, which made the music charts back then. That’s Back Then, as in – back when movies began with a fixed camera shot while the opening credits rolled up the screen. 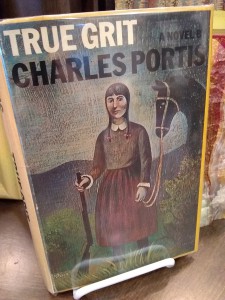 I still don’t read a lot of western books, but True Grit is a genuine classic, in my opinion. It’s also fun to read, in that it takes place in this general area, with specific references to McAlester, Oklahoma, where I graduated high school. (…and where someone who REALLY liked John Wayne also attended, thus the above down-low admission.)

All of that makes the book that came in today all the more special.

I’ve written about True Grit before, about how author Charles Portis was able to weave authentic western Arkansas colloquial phrases into stretches of dialogue that are almost poetic. The book was an instant hit when it was released in 1968, and Mr Wayne won his only Academy Award for his performance just a year later.

The First Edition hardback that arrived today features an inscription on the title page, hand-written by Glen Campbell that reads “You’re gentle on my mind, always.” Gentle on My Mind, of course, was the name of the theme song for the Glen Campbell Goodtime Hour, his popular variety show. (Variety shows used to be popular. That was before they invented Reality.) 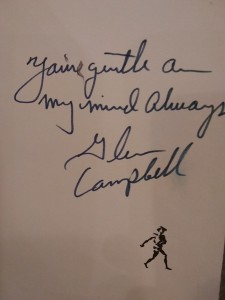 I’m sure the book would be more valuable if signed by Charles Portis. Probably John Wayne’s signature is more collectible than that of Glen Campbell. As it is, I’m happy to have in the shop a copy of one of the most memorable western stories ever to be made into a couple of movies.

The movie opening is available on YouTube, and was an instant reminder of the singing abilities of Glen Campbell, regardless of his acting skills.