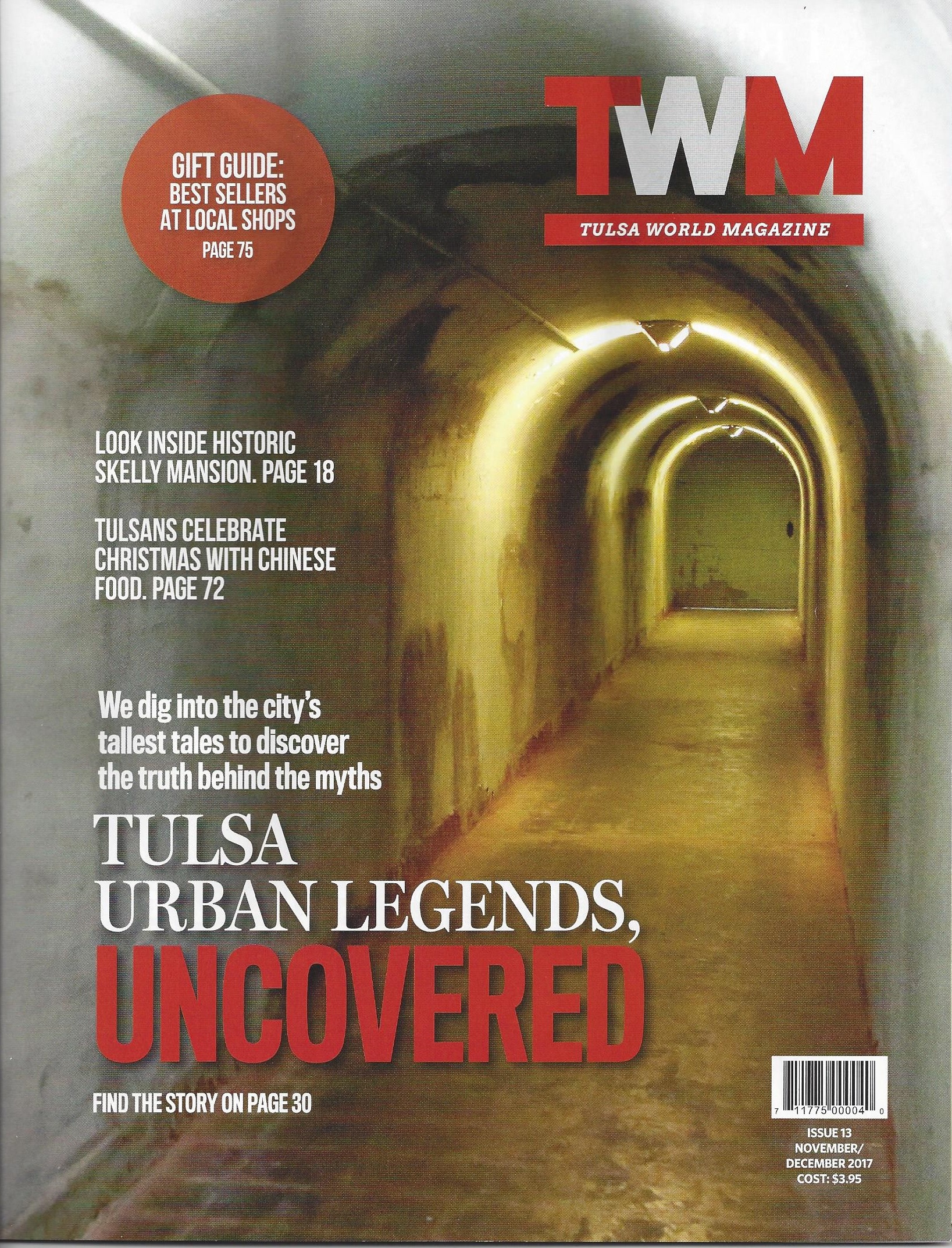 It used to be the case that I would agree with that old axiom – all publicity is good publicity, as long as they spell the name right. In the post-H. Weinstein era that we live in, I’m not sure that adage is still on the mark.

But – as it is press coverage of a positive sort, and puts us in slightly exclusive company, I’m quite pleased to see us included in Scott Cherry’s list of the Tulsa area’s “Hidden Gems.” 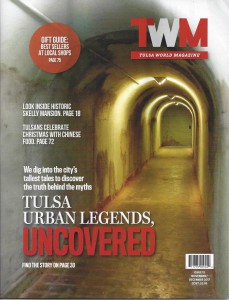 In the Tulsa World Magazine, Issue 13 – just out – Mr Cherry says “In a metro area the size of Tulsa, most everyone likes to frequent what could be described as hidden gems – restaurants with loyal followings that largely go unnoticed by the majority of diners.”

While I hate to think of our place as “unnoticed,” I recognize that we don’t have a large following like the big-boy restaurants. Give that we have only two employees – Dustin and me – it’s probably a good thing we don’t have a hundreds of folks lining up at lunchtime.

Even I had to admit that many of the other restaurants named in the article were previously unknown to me. (Although it isn’t surprising, given that I don’t get out all that often…) 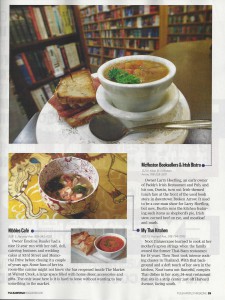 It was nice of Mr Cherry to include us in his list, and I’m proud to be among his ten favorite “hidden gems” in the Tulsa area. If you missed his list, here is a link to the slideshow.

It should be said that Scott’s columns have quite a following and even the mention in his list has resulted in several phone calls and lunchtime first-timers.

Judging from the photographs that were included in the article, there are some some pretty dishes being prepared out there, and – obviously – some pretty tasting offerings that are under-the-radar. And – like our lunchtime service – it appears many on the list are the product of owner-chefs and relatively small staffs.

Knowing what a tough business the food industry is, I’m was pleased to see that there are some real veterans out there, like LaRoma on South Sheridan in Tulsa. Thirty-plus years!

We’re in our twelfth year on Main Street in Broken Arrow, offering lunches for about half that time. I’ve worked some really, really busy places, cranking out food – and I have to say there are some positive aspects of being a “hidden gem.” 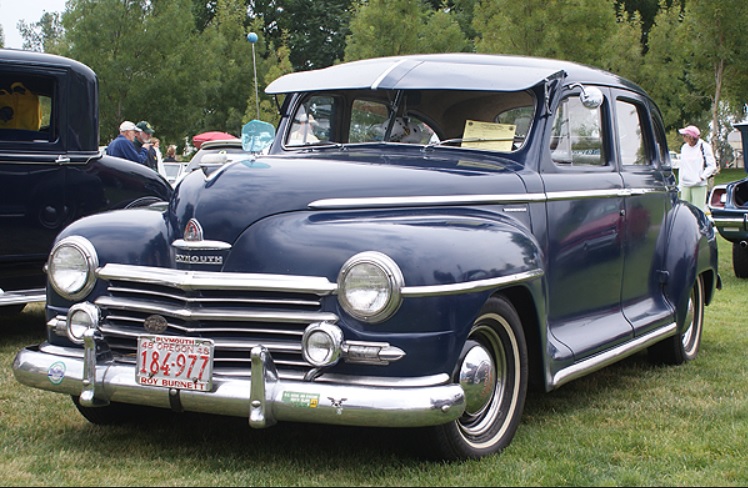 My father had me on his lap with his hand around mine, showing me how to shift through the gears. Three-on-the-tree, or whatever they called those old steering column shifters. It’s the earliest model car I remember our family owning.

“Maybe you’ll be driving this one of these days,” said my father. “Maybe pigs will fly,” I answered. (Just kidding.)

Back then I thought it was a possibility. Heck, maybe a certainty. I remember several times giving it the car-buyer-once-over. Checking out that sailing ship emblem on the trunk badge, exploring the curved lower door that was almost a running board. A moveable spotlight on the front fender with the grip and switch near the steering wheel. (Not one in the image, but WE sure had one!) Fine stuff. A visor-awning over the windshield. Light-up radio. Little chrome horn bar.

Yeah. All mine. One of these days.

Man, what a beast. As you can tell, I’m driving down memory lane today. As a Craigslist browsing regular, I ran across a picture of a wreck of a Plymouth (project car, as it was described) that will – in all likelihood – remain a wreck until gravity pulls it into the earth’s crust.

It made me think about that old blue cruiser that used to sit in our driveway, though.

The whole car thing was an adventure. It belonged to my Uncle Maury and Aunt Evelyn, and they must have bought a new car, because – next thing I know – I’m riding on the train with my father to Wichita. One of the few times in my life I rode a passenger train. We’re going there to get a car and drive it back home.

I must have been pretty overwhelmed by the whole experience (I was just a little kid, easily overwhelmed…) because the next thing I recall about the journey was driving for hours and then pulling into my Great-Aunt Eva’s driveway. As he shut off the engine he explained to me that we were just there for a pit stop.

“Hello, hello!” said my father to Aunt Eva, who was smiling in the doorway, obviously not expecting us. “Can’t stay,” he said, as she let us in. He nudged me toward her as he diverted to pit lane.

“You’ll have some pie, though,” she answered. 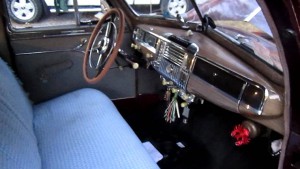 Aunt Eva leaned down to me. “You’ll have some pie.” (It wasn’t a question she put to me. It was a statement of fact.)

Faster than humanly possible, she drew out the pie, sliced and plated it, and handed me a spoon. It was one of THOSE kinds of pies – all creamy and meringue-y and delicious – the kind that requires a spoon.

Faster than humanly possible, I inhaled it. Hey, it was a kid-covert mission of sorts. I’d heard him say “no time” but Aunt Eva and I set out to prove him wrong, and we did. She anticipated his return and quickly towel-dabbed my face clean before he rounded the corner.

He exchanged the briefest of conversations with Aunt Eva, and then asked if I was ready to go. I nodded my assent, not trusting that the pie was completely swallowed.

It must have been a special kind of hug that Aunt Eva gave me, because – ever after – I believed she was the sweetest, kindest, kid-loving-est Aunt a kid could ever have. And my father and I walked down her tree-root-broken sidewalk to the new car.

Even today, seeing the rusted-out Plymouth in the picture on the internet, I suddenly think of pie and those childhood events we only later recognize as miracles. 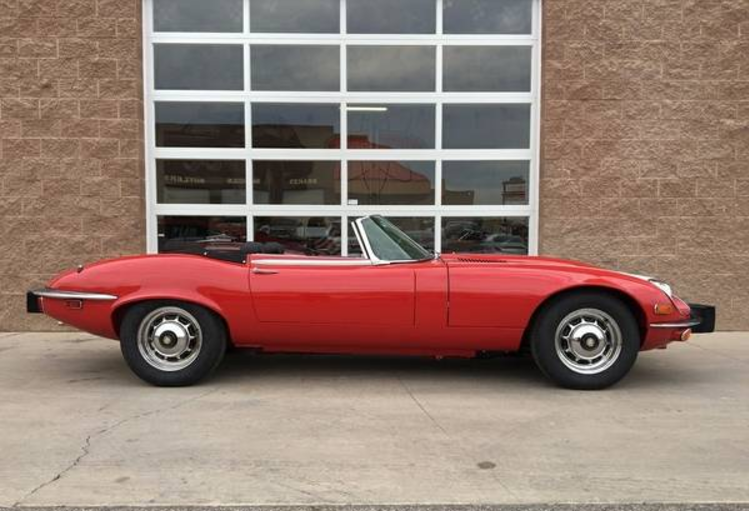 There was a place called Tink’s Auto Mart on South Sheridan when I first moved to Tulsa. I was a lot younger then, and having sold the Chevy van I’d acquired to haul our music equipment around, I was pedaling to and from work on a ten-speed.

THAT’s enough to put the fear of the automobile in you, let me tell ya’. It was NASCAR-style driving in Tulsa even back then, but at least the streets (with exceptions) have been widened since then.

I worked in the shopping center across from Tink’s, and looking out of the plate glass windows of the store’s showroom, I could ogle the British sports cars set out on display. Nearest the street was a tiny little car, which looked like a toy from my vantage point. Sleek looking, but little.

Also facing sideways (to show it in profile from the street) and parked just behind was another sporty model – a little boxier, but quite a bit larger. It was displayed on some sort of raised ramp, so it could be seen over the smaller car.

Behind the other two, also in profile, was long, torpedo-looking car – parked on a step-up concrete pad. It was gun-grey and about the sleekest looking thing I had ever seen. And believe me, I looked it over.

Rode my ten-speed across the street several times a week, after leaving work, just to look at those British sports cars. Particularly that grey-coloured (British spelling) work of art. It had twelve cylinders, which to me added up to – FAAST. It had a convertible top. Shifter. Wire wheels, sort of James Bond style, without the razor-tipped knock off caps.

I was working away at my day job, saving up some cash toward another vehicle and really imagining myself in that Great Grey.

Oddly enough, I didn’t even look at the price stickers until I had saved up enough that I thought it might cover a down payment. When I had stashed that amount back, I rode my bike over and looked at the cars, and the prices.

The Jag? The XKE grey beauty? Six-thousand dollars. Six thousand dollars, and I wondered who could possibly afford to spend that much money on a car. It was a wonderful machine, but clearly not for me.

The Triumph TR6 was also a good looking ride, I thought. Not so sleek as the Jag. Kinda boxy if truth be told. Six cylinders instead of the Jag’s twelve. Still, a nice top end on that wood-dash-mounted speedometer. Three-thousand dollars and change. And change, because the big number was the three, followed by the word ‘thousand.’ Still out of my league.

And so, I found myself peering into the cockpit of a Spitfire, the little brother Triumph sports car with the four cylinders and a top speed of eighty with a tailwind. It also had a nice wood dashboard, though. Shifter. Convertible.

And a price tag that started with a ‘one.’

I was still looking into it when the salesman sidled up and looked me over, gave a loud guffaw (pretty sure it was a guffaw…) and laughingly asked if I was going to use ‘that bicycle’ as my trade in. He might have meant it as a joke, but if he had intended it to be a snide and cutting remark, he could not have delivered it with more aplomb.

After mentally responding, I mounted ‘that bicycle’ and rode nearly seven miles through the NASCAR traffic to the other Triumph car dealer at 11th and Delaware. I was out of breath when I pulled up in their lot and was still gathering myself when the salesman approached me and said, “I think I have a Spitfire exactly the color of your bicycle.”

I think you just sold it, I replied.

I had a wad of cash in my pocket, and it turned out to be enough to get a set of keys placed in my palm.

If I had placed that car in storage instead of driving it for the next few years, it might be worth six thousand dollars today – maybe a little more to an excited collector. Remember, six-thousand? The price of the new Jaguar back then.

The XKE in the picture is a 1974, a used car, meticulously restored, and – excepting the color – pretty much the car I had ogled all those months from across the street. Asking price for this red beauty listed on Craigslist this afternoon?

Although I’m considerably older now and have met some folks who could – I’m still wondering – who would spend that much money on a car? (Then again, just think of my profit margin if I had scraped up the money back in 1973!)

I can always imagine myself running through the Jag’s gears with the wind in my thinning hair, even while I’m actually behind the wheel of that thirty-year-old van…