I was nineteen and an evangelist for Billy Joel, certain that I was the only person in the world who had ever heard of him. I was determined to change that.

Freshly settled into my garage apartment, there was a plant on the windowsill and a chair in the corner. The primary décor though, was that blaster of a stereo. On my own, livin’ large, no Dad-man to TID me. (Turn-it-Down: that was a time before earbuds, you know.)

I suppose Billy Joel’s music must have come to me through the ionosphere or through some cosmic wave-bounces. I don’t know how else I would have heard of him. Oh sure, there was that Piano Man thing on the radio, but had anyone really listened to him? Really Listened? I’d ask, Have you heard of this guy named Billy Joel? Nah. Everyone had heard of Billy Jack, and Billy Bob, and Billy – our local home-town guitar-slinger. 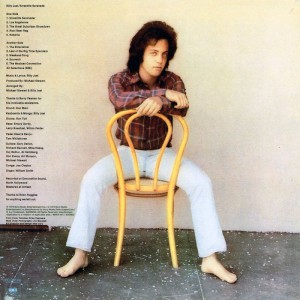 Billy Joel, not so much.

In our small town, you could count the number of young singles with their own apartments. I imagine somebody probably did. Like I said. Small town. I had my share of visitors, and – they paid the proselytizer’s price: I was going to make believers out of them with a fairly loud dose of Billy Joel’s album “Streetlife Serenade.”

You gotta hear this! I’d say, lowering the needle onto the record. And the piano started. There weren’t any more new Beatles records, but what came out of the speakers on this album had the Fab-Four’s mix of ballads and rockers and thought-provokers and tear-jerkers. Vocals and instrumentals. Harmonies. Lead guitar solos. Oh, yeah. Piano, too.

Wait, wait, I’d plead, when my guest would begin to fidget. This one other song… you’ve GOT to hear this one! I guess I figured to wear them down into liking it.

And so, that’s how I became the young single guy with his own apartment that no one visited anymore. (Kidding. It was a small town, after all. They just started bringing their own music with them.)

I subsequently ended my career as a Billy Joel Preacher. In truth, either BJ changed, or I did, because none of his later works seemed to knock me back in the way of Streetlife Serenade. He had plenty of big hits in the years to come, but – alas – he was forced to promote them on his own.

I was out on dragging friends in front of my stereo to hear him.

Put the album on this evening (I say that as though I placed a platter on a turntable. Nah. Streamed it. My old vinyl was pretty well worn.)

Turned it up. Then tweaked it up just a little big more, just in time for my air-drumsticks to knock down that roll before the third chorus with the perfect-piercing falsetto from a young Billy Joel.

That probably wasn’t my Dad telling me to turn it down, but I did anyway.

Once that last song was over.

Ahhh, heck. There I go, getting all Billy Joel evangelistic…)

Knock on wood. Why? How come we need to do that?

I was updating our online menu page (bumped up the priorities list to the point it finally got completed!) and saw a previous blog headline, in which I implored myself to “knock on wood.” It seemed appropriate at the time.

While moving some books around this afternoon, I came across a little volume entitled “Heavens to Betsy!” (which is a whole ‘nother story…) and I looked in the index. Sure enough, “knock on wood’ is listed among the “400 Colorful Words – and Their Origins” in the book.

Apparently, I’m not the only one curious about the origin of the superstition, but – according to the author – the exact beginning of the phrase has been lost to time. He quotes a similar book from 1946 in which the writer attributes it to an old game called “Touching Wood” or “Wood Tag.”

I’m old enough that I remember playing outside games. And I seem to recall one in which we raced around wildly trying to get from point-A to point-B while whoever was “It” chased us. If you touched a tree or a porch railing – something made of wood – you were safe, and could dart away again when “It” went after someone else.

Remember, we didn’t have video games back then. We chased each other around. Get over it.

At any rate, the 1946 author seemed to think that whole thing dated clear back to the old, Old Days, when people believed that there were tree spirits that could keep people safe. (What? Tree Spirits aren’t Real?) He also suggests that it could have something to do with the original wooden Cross and taking an oath on a crucifix.

This is how work in the book shop tends to be put off – reading one tiny paragraph in a book leads to another, and the next thing you know, a half hour is gone.

I was trying to put the little “Heavens to Betsy” book down and spotted a phrase that made me immediately think of my dear grandmother, who exclaimed with exasperation, “For Crying in a Bucket!” when she was put out by something.

The book says Granny was doing a turn on “For Crying out Loud!” which is called a ‘minced oath,’ which many of us are guilty of professing on occasion – like saying “Shoot!” instead of that four-letter expletive that is the originating profanity. These days many things that never would have been said aloud are spoken with reckless abandon, including “For Christ’s Sake!” – which waaaay back when was lumped in with those other words and phrases never said publicly or in mixed company, for cryin’ out loud.

This I recognize from Charles Dickens novels in which even such phrases as “By G–!” are dashed instead of put forward uncensored, to avoid offending the dear reader, who might become so astonished as to grumble:

For Crying in a Bucket!

It’s got to be a sign of the impending Apocalypse! WHAT?

As an admitted Shadetree Mechanic, I have tackled projects from refrigerator thermostats to British sports car rod-bearing replacement. Some projects turn out better than others but almost all provide examples of my own version of Murphy’s Law.

If it is connected with plastic, it will break.
A dropped small object will bounce to a point just out of reach.
It is always the ‘other’ type of screwdriver required.
The importance of leftover parts will only be discovered when reassembly is complete.
Custom fittings will not fit. 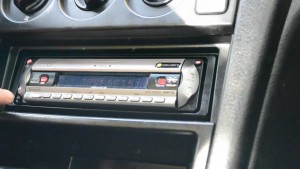 I have enough of these to be called a manifesto, but you get the idea. That’s why I am currently astonished.

I bought a new car radio to replace the one my business partner had installed for me 17 years ago.

You need a CD player, he said. Cassettes are out. CDs are the thing of the future.

It’s a nice Sony, professionally installed, and I haven’t played a CD in over a decade. So my project for tomorrow is to install a replacement to stream music from my phone. (Am I on the cutting edge, or what?)

I Googled YouTube for hints on how to get that old one out. This is now my favorite all-time ‘how-to’ video:

(It gets better and better as it goes along. Spoiler: he says ‘thin.’ I thought his advice stated the tools must be made of ‘tin,’ and that he was failing to follow his own instructions.)

After watching him struggle with it (assuming there were numerous outtakes that didn’t make the internet), I was prepared to head off to Best Buy to find the correct radio removal tool. But I had a few extra minutes, and…

The face plate popped right off, of course, but the thin plastic border piece that I knew was going to break… didn’t. Instead of jamming steak knives into my car dash, I wiggled a couple of exposed prongs… and the radio slid right out. The big plastic dash board facing – installed 17 years ago – for the smaller sized Sony radio… of course it was going to crack and break under my prying screwdriver.

The wires were long enough that I could pull the entire radio free and reach the harness. Which unplugged with the least effort imaginable. The antenna wire already had the correct end piece for the new radio. My aftermarket harness adapter (purchased separately) actually fit and the wire colors matched correctly.

I’m admitting to you right here – that at each stage – I said aloud: UNBELIEVABLE! Or INCREDIBLE! Or some similar form of spoken astonishment.

The radio and all parts of the fascia were out and sitting on the passenger seat in less than four minutes. I usually spend that length of time looking for my needle-nose or trying to prop up the flashlight so I can see the plastic I’m about to break.

So rare when paid-forward Karma comes back all at once. So rare, in fact, that I’m worried about how tomorrow’s installation will go.

But at least I’ve got YouTube to turn to…