I know I’m not the only one it has happened to… I know it for a fact, because there was an English gentleman who was notably guilty of mixing up his words – so much so that his name became the descriptive term. Spoonerism: word and phrase mistakes that sometimes end up with comic consequences.

It happened at the cash register today, and it always makes me think of those occasions when such things went from my mouth into a microphone on live radio.

William Archibald Spooner was an Oxford professor in the late 1800s and early 1900s, known for his absent-mindedness and a proclivity for mixing up his words – with unintended results. It happened often enough that they were repeated by his students, and eventually came to be called spoonerisms. 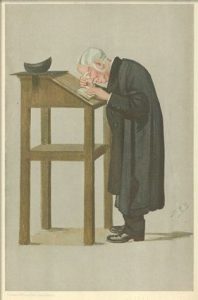 It was my personal practice to plow on when my mouth made a U-turn during a broadcast. My logic? I figured a percentage of the audience wasn’t paying that much attention to me anyway. Another percentage might assume they had misheard, making it their mistake instead of mine. I also figured my radio miscues had a distinct advantage over my friends who wrote for the newspaper: mine were immediately gone into the ephemeral stratosphere (almost always…), but printed mistakes sat around in legible print until they became wrappers for greasy trash or liners for the birdcage.

However. That particular election night, the hour was drawing late, I was growing tired, and the update segment was short. The deejay working the evening shift left his microphone on, to be ready when I finished my couple-of-minutes-long report.

One of the races was for STATE SCHOOL SUPERINTENDENT. Well. It either comes out right, or it doesn’t, and it didn’t. ‘Superintendent’ came out as SCOOPERintendent, which might not have been too bad if ‘state’ and ‘school’ hadn’t gotten garbled as well.

I was tired enough that I didn’t realize the implication of my error until the deejay started laughing, causing me to pause long enough to realize I was announcing the name of our next STOOL SCOOPERintendent.

It wasn’t quite as embarrassing as the live broadcast from a car dealership: Pat FITTER CHEVROLET. I’ll let you swap the start of those words to figure out my spoonerism on that one – one that caused me to be extra cautious in describing where I was for the rest of that promotion. I should have apologized to him then, but I’ll offer it now, a few decades-late. “Sorry about that, Mr. Fitter…”

My error at the register wasn’t even close to some of the classics, like SMART FELLER, which more than likely was invented for effect, rather than being actually uttered by Professor Spooner in his classroom. In fact, the Oxford dictionary only lists one phrase admitted to by Spooner: “The weight of rages will press hard upon the employer.” (The rate of wages…)

As for “It is kisstomary to cuss the bride,” and other such examples, they are more likely in the same chapter as those Yogi-isms attributed to Yankee baseballer Yogi Berra, who said “You should always go to other people’s funerals, otherwise, they won’t come to yours,” but also admitted “I didn’t really say everything I said.”

And there may be a little truth in all of them, even those Spoonerisms, if you just pay attention. As Yogi said…

You can observe a lot by just watching.