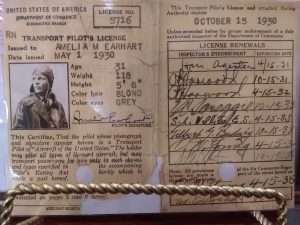 In 1965, I was on the speaker end of the radio rather than the microphone side, but – in thumbing through an old broadcasting annual – I was surprised there were names I recognize from when I finally made it into a Tulsa broadcast booth.

Also surprised at the limited number of stations licensed to Tulsa, until I remembered that FM back then was still a futuristic enterprise. In fact, of the six stations included in the Tulsa heading, none carry the FM designation. 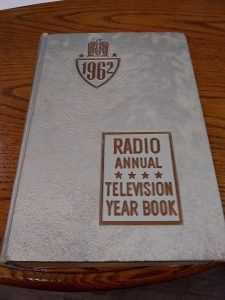 Some of you historian types will instantly know what these calls evolved into, but I have no recollection of KOME and only faintly recall KFMJ, although they signed on in 1938 and 1946 respectively. AH! Just looked at the fine print and recognize the name of the KFMJ program director – R.B. Blue, which I presume is Ron Blue, later of Swanson, I believe.

Possibly, broadcasting careers had a greater longevity back then, I don’t know. But it was over a decade later when I landed in Tulsa, and ran across some of these names. Carl Smith and Dick Schmitz listed at KAKC, although I think Mr Schmitz may have been in commercial production or marketing – I would recognize his voice, I’m sure, if I heard it today. I recall the names Joe Henderson and Mr Stuart (KVOO).

Out of market I recall the name Todd Storz at KOMA (OKC), but the name I was most familiar with at that frequency (I believe) was Jim St. John. Whatever station he was with, he was my favorite to imitate,

I’d be driving around in my little MGB, top down, radio up, and that big voice boomed out of my little speaker (monaural sound, of course!)

He would no sooner get it out of his mouth than I was repeating it in my wannabe radio voice. He had an affectation that had him drawing out the JIM part of his name, and almost skipping over the Saint, before closing it out. Like JIIIimmm st. JOHN! I practiced it often enough that I could have fooled his mother.

My memory has never been a bragging point. Some of the names sound SO familiar, but I can’t place how I would know them. Like Bill Hoover at KADA (Ada). William Drake (Bartlesville). R.J. Drury was still at Duncan (KRHD) when I was at KSWO (Lawton) – sister stations both listing Mr Drury as president. Dud Stallings was program director at KNED (McAlester) but when I worked across town at KTMC, Dud was that station’s chief engineer.

Looking over the listings for Oklahoma, I recognized KTAT (Frederick), the station where I first applied for a job, and – during the interview – was subjected to a litany of discouraging facts about that small SW Oklahoma town. There’s only one movie theater, he pointed out. Just change the movie once a week. Just the one drive-in restaurant. Not any young ladies, to speak of. (I was single.) A lot of farm reports to be read, hog futures, and such.

By the time the interview concluded, I felt fairly beaten down, and could not understand why ANYONE would want to live in Frederick.

Later in life, I realized that he didn’t want to hire someone with aspirations for a larger market career, someone he would train – only to have that person leave at the first opportunity. He probably hired a local who may be working there still.

KATZ – the same folks I went to work for shortly after they acquired KWEN-FM in Tulsa to program contemporary country music on the FM side. That darn upstart FM thing… I believe it was one of the first books after I joined the K95FM team that KRAV became the first FM station to achieve a number one rating. (Although – thinking about it just now, it was probably a qualified-by-demographic rating. I believe KRMG held the 12+ top-of-the-heap position, almost forever it seemed.)

The name Allan Muchmore has a familiar ring for some reason, but the station he managed is Muchmore (so to speak) ingrained. WBBZ (Ponca City) is my earliest memory of radio, partly because I remember gazing at it on the car’s dashboard as I sat on the front seat. (No seat belts or car seats in those rugged days!)

At this point, I don’t know if it is an actual memory, or something that was repeated often enough by my mother, who would swear that my list of earliest spoken words included

…which I would call out – pointing at the radio – when a Perry Como song was sent out over those WBBZ airwaves (they called them that, back in the day).

Ironically, as I was grabbing the old reference book to put it on the shelf, I opened the front cover and one of the first pages popped into view: an advertisement featuring the man himself. I was obliged to call out –

And then went back to the business of book storing.

The power of positive investigation.

There’s that old axiom about what curiosity does to the cat… then there are circumstances in which the reverse is closer to the truth.

I could be chasing a ball around a golf course in my now-rare spare time (how quickly the isolation/quarantine disappeared!), but – as many of you already know – I find it less frustrating to chase down problems plaguing my two sports cars. (Their age requires I have two to keep at least one running at all times…)

Memorial Day seemed like as good a time as any to run ‘Little Red’ out on the expressway. The battery seemed a little weak the last time I started it, and I knew a good little drive should charge it up to where it ought to be.

It’s a five-speed manual, and I have always enjoyed that merge-lane burst of acceleration, running through the gears, the whine of the engine, and the respect of the speed limit rolling into a cruising rate. (It is a bright red color – which, combined with the patience of the officers who have pulled me over – has trained me to look down at the speedometer.)

For a car that has spent a lot of time in a parking space, ‘Little Red’ doesn’t disappoint. I didn’t want to wind up in Muskogee, so I made an exit and turned around, running through the gears again and merging back onto the expressway in the opposite direction. Back in Broken Arrow, I sailed down the ramp and geared down at the stop light.

Looking around, I see what I assume to be the culprit, an older vehicle (as if mine isn’t old) that is probably in need of a tune-up. Light changes, and I am off again, second gear, third gear – wind it down – another stop light.

Another scent of gasoline. That’s curious, I thought.

When I pulled into the hardware store and shut off the engine, the gasoline smell was strong. More importantly, there were no other cars close by on which I could place the blame.

I popped the hood and leaned in. Sure enough, the pressured fuel line was damp. Right away, I was thinking of how hot that engine was, running up the RPMs, highway speeds. The engine ticked away, but it couldn’t have cooled quickly enough for my comfort.

On my way back out of the store, I began thinking about odds and options. Not being particularly comfortable driving a car that – by all indications – was leaking a flammable liquid onto a hot surface, I considered the alternative. Calling a wrecker, waiting (on Memorial Day afternoon) in a parking lot, and then shelling out the cash for the privilege of not blowing myself up.

The choice was obvious.

I drove back with my fingers crossed as an insurance policy, thinking so many positive thoughts about making it safely that I was afraid my ears might begin to bleed.

When I popped the hood in the safety of my parking spot, the same fuel line was still damp, but I noticed the line next to it had a rubber connector – clearly ravaged by time. Which line was leaking?

Only one way to find out.

Actually, there are probably many, many safe ways that a good mechanic would make the determination, but – as I don’t profess to be a good mechanic – I just started the engine and jumped out to have a look.

I will admit shock at seeing a four-foot stream of gasoline shooting out beyond the front end of the car onto the drive. Immediately, I thought, “that’s not a good thing.” Then I remembered that expressway-heated engine and that amount of fuel geyser-ing under the hood at the stop lights. Another old axiom: What we don’t know, won’t hurt us. Patently false.

It will be like a short distance par-four to repair. A project for next weekend, weather-willing.

And I’m more emphatic now that – as regards curiosity (along with the power of positive thinking and crossed fingers) – I am decidedly in the corner with the cat.