Sincerely disappointing. The football game to determine the champion of the season, the Superbowl of the collegiate ranks, the sadly-named Discover-BCS National Championship Game, is available only on cable television.

Well, that isn’t exactly true. If you have a handheld computer device that can access the ESPN application (and live in the Pacific time zone) you can view it on WatchESPN.

Unfortunately, the television I generally park myself in front of for couch-potato-ing doesn’t feature ESPN. (Editor’s Note: There is a television in the bookstore office that is part of a cable bundle – including ESPN – that would be viewable if the proprietor cared to forego dinner and stay at the shop for most of the evening.)

I thought there were some things that remained sacred. The NFL is still carried on the free channels. News bulletins. Car races. Soap operas. Even the shopping channels have a spot on the basic tier. Most of the college bowls games?

They belonged to ESPN. I didn’t see too many as a result.

The OU Sooners played their game on the FOX network, but then – after halftime – fans like me were hurting too much to continue watching. In fact, fans who shelled out for tickets, travel, hotels, meals, and souvenirs were filing out of the stadium long before the game ended. Even though it was one of the few games of the season I could watch, I couldn’t bear it.

I’ll have to wait until March, I suppose, when the basketball season is carried by old trusty CBS, available on that ESPN-less screen.

Of course, I can watch all the BookTV I want, at least until the publishers organize and hold a championship, which will be snapped up by ESPN, no doubt.

I’ve been spending time with a favorite family, one that I’ve not visited in some time. The tribulations facing William Dorrit and his grown children make for some great drama, as co-presented by the BBC and WGBH-Boston in an adaptation of Little Dorrit, by Charles Dickens.

Somehow, I missed the whole miniseries when it aired in the US in 2010, but thanks to the hand-held viewing device (you know the thing to which I refer, which shall go un-named here…) I’ve been able to catch up on the episodes. 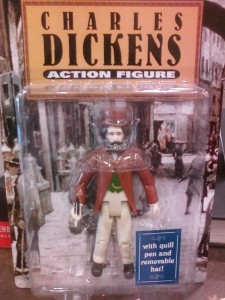 Much of the real-life of Mr. Dickens was woven into the fabric of his stories, and the patriarch of the Dorrit clan begins the story imprisoned for debt – just as Dickens’ own father had been jailed. A social reformer on many issues, Dickens points out the lack of logic in detaining debtors, who otherwise might have been able to work to pay off their creditors.

Although the work was published serially more than 150 years ago, his topics still reflect the times. One of the subplots involves a banker who is said to turn his clients investments to gold with unfailing returns – in the manner of present-day schemer Bernie Madoff. And – just as the financial scheme of Madoff’s house came crashing down, Mr. Merdle suffers financial and social ruin when his investment scheme eventually fails. The characters in Little Dorrit have their financial security destroyed due to the collapse of what had been considered a no-risk investment, as did the victims of Bernie Madoff.

Where Dickens created distinct characters to enliven his novels, the BBC production has followed faithfully. Andy Serkis plays the evil villain Mssr. Rigaud, who hisses about as much as the character Gollum in the Lord of the Rings movies, also played by Serkis. And Mr. Pancks, the snorting and nervous-twitching rent collector is done justice by British actor Eddie Marsan.

I realize though, that it isn’t the Dorrit family I’m especially fond of – it is the telling of their story by Charles Dickens that draws me in. During William Dorrit’s stint in prison he is alternately pompous and sniveling. When he is freed at long last, his newly-found fortune inspires conceit and condescension rather than inspiration for the greater good. His daughter Fanny was already snobbish before the family fortunes changed, and son Edward is idle and feckless regardless of his financial position.

Only Little Dorrit – Amy – who was born in the debtors’ prison, remains her kindhearted self throughout.

Perhaps if I had offered a Little Dorrit action figure instead of the one of Mr. Dickens (complete with removable pen and hat!), it might have sold during the holiday season. I’m a firm believer though, that Dickens is the gift that keeps on giving!

It’s late to be asking this, but when did everything turn – Extreme?

One of the earliest appearances, as far as I can recall, had to do with ESPN and their Extreme Sports. Compared to four hour baseball games and Sunday afternoon coverage of quietly-announced golf events, leaping from a helicopter to ski down the snow-covered face of an Alpine mountainside does seem pretty extreme.

But it didn’t stop at sky-diving, bull-running, or Snake Canyon motorcycle jumping.

Okay. So maybe skateboarding in those events that have contestants shooting fifteen or twenty feet into the air could be considered extreme. Pushing yourself one-footed down the sidewalk and then coasting for six feet – not so much.

On my way to work this morning, I noticed that Broken Arrow has an Extreme hair salon. I’m not really sure what that means. Will you leave later with all your hair hacked off? To the point your friends will notice your ‘extreme’ style change? Or is the trim achieved with a chainsaw? That, even I would admit, would be a fairly extreme way to get a haircut.

What about the Extreme nail salon? There is one of those, too. It makes me think of those pictures of oddballs who never, ever, trim their fingernails and have those long twisty things hanging off the ends of their digits. That’s extreme, in my book. Clippers and a nail file? I don’t see how that qualifies. Applying nail polish and paint? Extreme? Maybe if it is done with a snow-blower.

Most of these, I’ve seen. Some are courtesy of Google. They are local.

Then, there are the products. Drink down a No Fear Extreme energy drink and perhaps you’ll experience supersonic flight – without the jet. The Extreme-Clean drink promises to run through your gastric system eliminating toxins on its merry (but extreme) journey.

Are things better, when Extreme?

If so, then let me show you some Extreme Books, or try the Extreme Irish Stew!

On second thought, I’ll stick with moderate to slightly-exciting.