You know what they say about change… Keep it! (I’m kidding. I don’t think anyone ever says “Keep the change” except in the movies.) The old saying is something like – there is nothing constant, but change. It’s a froo-froo way of pointing out that we can’t really rely on things being the same as they were last week.

It’s the same with the lunchtime menu.

The items have been changed out a couple of times already, and I’ve mentioned to folks that the cardstock menu is just temporary since I don’t want to pay to etch it in stone (or lamination) until I’m relatively certain that they are the right things at the right price.

A couple of items have been bumped. Not that there was anything wrong with the food, but since I’m still the head chef, line cook, waiter, busboy, and dishwasher – it is important that anything being offered is easy to plate up and serve. (A party of six had me worried, but the majority ordered Irish stew, of which I am a master ladler. (Spellchecker didn’t flag that as a made up word, so perhaps there is a user of ladles called such…)

The grilled chicken is gone. There won’t be a lot of lamenting among you, I know, because it was among the least ordered items on the menu. In its place is a grilled three-cheese: it is nothing fancy, but plenty tasty on the grilled Irish loaf and on the inexpensive end of the price line. The corned beef and Swiss sandwich no longer features slaw atop the sliced meat. I was trying to achieve a Reuben-like sandwich without grilling sauerkraut (which produces a distinct aroma that books love to absorb). I thought the slaw might substitute, but I didn’t care for it after all. The sandwich works as a kraut-less Reuben and is still delicious.

The hours for the food service are still limited. I want to run with it, but I’m still at the crawl/walk stage. The 11:30am to 1:30pm window covers most folk’s lunch hour and gives me plenty of time to get my dishwashing apron a workout afterward.

You may have heard that the traveling Antiques Roadshow program on PBS discovered its most valuable treasure to date during its stop in Tulsa. Surprising, to most everybody, was the collection of Chinese-carved rhinoceros horn cups valued at one to one-point-five million dollars.

As appraiser Lark Mason noted, “You never know what is going to turn up.”

How true that is.

While not on the scale of the horn-cups in value, a rarely seen book is currently resting in the inventory at McHuston Booksellers.

The volume has had a bit of abuse in its lifetime, but copies of the 1932 first edition of “The Store” by author T. S. Stribling are amazingly hard to come by. It is true that among the millions of books published since Gutenberg perfected his printing machine, there are rarer titles. Some are so scarce that they have been completely lost to history, with not a single copy remaining.

The difference is, almost all of those books came and went without much discussion and a great many found their final resting spot in a public landfill. 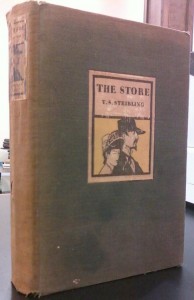 Mr. Stribling won the Pulitzer Prize in 1933 for his work, and given that there are collectors who specialize in first edition copies of prize-winners, it makes this book a minor treasure.

For the person trying to put together a set of Pulitzer Winners who is missing this title, there are but a handful offered for sale anywhere.

One of them is in Broken Arrow, Oklahoma.

It is a bit fragile these days, but still represents a nice find.

Oh, and if you’re curious about the value… it is priced under a thousand – which is the going rate for another listed online, a book in better shape but not a true first edition.

You just never know what will turn up.

A complete month! The first in the new location, and WOW! how time speeds along. Here it is, a rainy end to April, and the occasion is being marked by the official fire-up of the coffee-maker.

We’ve had some test runs along the way, but no way to accommodate those of you who might want cream or sweetener. Those are laid in and ready. The coffee is hot. The open sign is on. 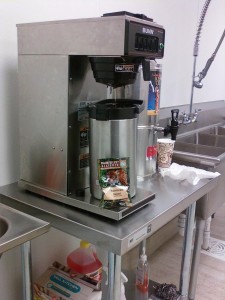 The brand of choice is still undecided. This morning the scent in the air is coming from the Rainforest Alliance certified select, which – to my taste – has the distinct flavor of coffee. As I’m readily admitting to anyone who might have a passing interest, the morning cup is not my – well, it’s not my cup of tea. Or coffee.

I can pass a blindfolded taste test over sodas, with a taste discerning enough to identify Sprite as compared to Mountain Dew, or Diet Coke from Dr Pepper (or even Pepsi). Hot coffee, hot cocoa, hot chocolate: not for me. Something about the burning sensation on the lips and tongue do me in. I have a cup of this Rainforest Select in front of me, but it is sufficiently cooled that I can drink it. As to its wake-up factor, aroma, robustness, bold-character flavor, and other java-related properties, I just haven’t had enough morning brew to render a qualified opinion. 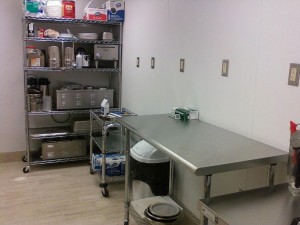 The package is attractive, anyway.

Earlier I had intended to use Gevalia brand, a European coffee that supposedly is held in high regard. I was led to believe that it was rather exclusive but I saw a huge display of it just yesterday in Reasor’s. I don’t imagine that the coffee at McHuston Booksellers has to be one-of-a-kind, but I was hoping for something that would be a little different than the home cup. Maybe Gevalia is different enough, or even this Rainforest Select.

The taste is starting to grow on me.

The plan is still to offer a second, flavored coffee in the morning and I’m thinking the Rainforest Caramel is probably going to be the blend. Everyone who has tried it has returned a favorable opinion. 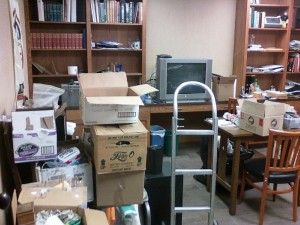 As a non-coffee drinker who liked it, that fact alone carries a lot of weight.

The pix this morning are of the kitchen and the coffeemaker. There are a lot of restaurants that don’t want you to see where the food is prepared, for one reason or another. In my days at Paddy’s Irish, I wasn’t ashamed of the kitchen, but it wasn’t a source of pride either. The equipment was older and mismatched. The space was confined and irregularly laid out due to the shape of the building. It passed the health department inspections.

The kitchen at McHuston Booksellers, on the other hand, is one that I am proud to show off, although it still isn’t quite ready. Still waiting for the installation of a freezer and refrigerator before the food service can be implemented. The office is a completely different story, as you can see in the image. I’m still working to get the last of the boxed books out on the shelves, and the office-related items put into some kind of order.

My son Dustin and I finished off one of the two storage units on Sunday, moving extra shelving units and items out of one to combine into a single spot and bringing back a last load to the store. It’s good to have that part taken care of. 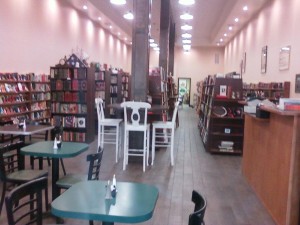 The final image is taken from the peeking-through-the-front-window vantage point, which a lot of folks have been doing. I suppose an open sign on the front door is in order, to complement the lighted sign at the other end of the glass windows. It is a little tough to see through the slightly-tinted windows, and thus, the shielding-hand peek approach. It’s okay to open the door and come on in though.

We’ve got your cup o’ coffee ready to go.